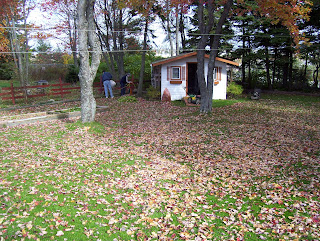 First of all, I would like to thank Dixon Rice for inviting me to submit an article for his Blog. Wrote up some of my background and he added it to his site Wredheaded Writer on Monday. Why don't you slip over and see what he has to say? Lots of other guest bloggers.

Today, we are going to get our share of the hurricane. I don't imagine it will be anything like New Jersey. Normally it would have come straight up and hit us here in Nova Scotia. This time it took a sharp left turn and will come around to get us on the backside. 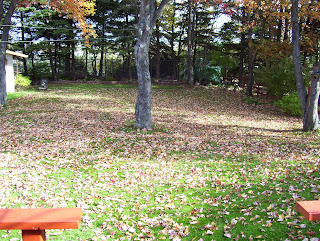 We have a lot of tall maple trees in and around my yard, so that means a lot of leaves to rake. Last Friday we had five bags of leaves and Sunday nine more. Here are some before and after pictures from Sunday. I'm hoping the high winds will blow the rest away or I will have to do it at least once more.

We used to have a Walmart here in the city, a couple of miles away. It had been a Woolco. A few years ago, they decided to close down and move to the industrial park on the way to the airport. Everyone was upset about it and my trips

there decreased considerably.
Now they have decided to return to the city. They will move into a defunct Zellers, which will be smaller than a regular Walmart. So everyone is excited about it as it will be within walking distance, which could be a bad thing. 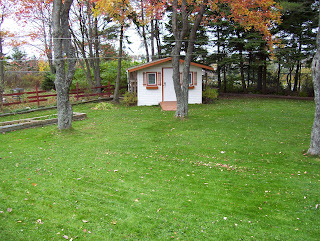 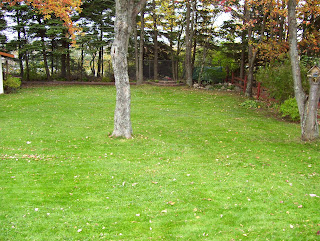 WHEN 100 FOLLOWERS IS BETTER THAN 1,000They call it a tribe. I'm not crazy about that word, because
fans aren't a tribe. They are good friends, in my opinion.
But anyway, let's talk numbers.

When someone says, "Follow me on..." so he can build up
followers on some social network, what does that mean?
So he has 10,000 followers. How many of those read what
he has to say? How many of those look forward to buying
his work? How many of those belong to his "tribe" because
they feel they have to because there are 9,999 other
people who do? How many just delete?

While gobs of followers sound good, we both know that
what counts is how many care enough to come hear you speak,
buy your book, or tell their friends about you.

Finding these "solid" fans evades most people, mainly
because so many up-and-coming writers are looking over the
tops of them, hunting through hordes of strangers to build
that elusive platform.

Start with the lowest common denominator. Start with who
you know. Connect with them, keep in touch with them, and
they become your best allies.

The point is that starting with people who love and trust you,
is a huge jumpstart. They not only buy your work, but they
talk you up with vigor to their connections. That's planting
seeds that spread roots everywhere!

Bottom line, don't overlook everybody you touch or who touches
you when you need a platform. You can start your garden in
well tilled soil or you can start it in new ground. Guess
which one will give you the best results?


My books on Amazon http://tinyurl.com/8heos4e .