Watching 'Fortitude'. Withall that snow, I have yet to see any vehicle get stuck.

My General Electric toaster, a wedding present, is over 49 yrs. old.

Too hot in bed last night, had to hang one foot out.

The electric co. installed a new power meter the other day. 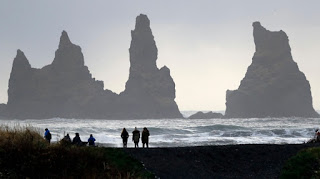 LONDON - Iceland will be the first country in the world to make employers prove they offer equal pay regardless of gender, ethnicity, sexuality or nationality, the Nordic nation's government said Wednesday - International Women's Day.
The government said it will introduce legislation to parliament this month, requiring all employers with more than 25 staff to obtain certification to prove they give equal pay for work of equal value.
While other countries, and the U.S. state of Minnesota, have equal-salary certificate policies, Iceland is thought to be the first to make it mandatory for both private and public firms.
Equality and Social Affairs Minister Thorsteinn Viglundsson said “the time is right to do something radical about this issue.”
“Equal rights are human rights,” he said. “We need to make sure that men and women enjoy equal opportunity in the workplace. It is our responsibility to take every measure to achieve that.”
Iceland has been ranked the best country in the world for gender equality by the World Economic Forum, but Icelandic women still earn, on average, 14 to 18 per cent less than men.
In October thousands of Icelandic women left work at 2:38 p.m. and demonstrated outside parliament to protest the gender pay gap. Women's rights groups calculate that after that time each day, women are working for free.
The new legislation is expected to be approved by Iceland's parliament because it has support from both government and opposition lawmakers. The government hopes to implement it by 2020.
Viglundsson said some people had argued the law imposes unneeded bureaucracy on firms, and is not necessary because the pay gap is closing.
"It is a burden to put on companies to have to comply with a law like this,” he acknowledged. “But we put such burdens on companies all the time when it comes to auditing your annual accounts or turning in your tax report.
Posted by Jack Sakalauskas at Wednesday, March 08, 2017

These people who are protesting seem to be rather weak-minded for they are absolutely clueless that they are the pawns of the establishment trying so desperately to stop Trump from reforming their little club. They may claim to hate the special interests, yet the special interests are the very ones who are supporting and funding these protests.

The political elite are hiding in the shadows funding this entire movement. Obama, meanwhile, will reenter politics and get involved in rigging the voting lines so the Democrats can win back Congress.

These people protesting are egged on by the elites in the shadows and they are using this immigration issue to paint Trump as racist because the people protesting are far to naive to comprehend what is going on in the international stage. The real battle is freedom and reforming the powers-that-be, but these protesters cannot see the agenda behind the curtain. They have swallowed the bait, hock-line-and-sinker and are now simply the pawns of the elite hiding in the shadows.

You hear all that talk about building a wall and all the trouble its causing, 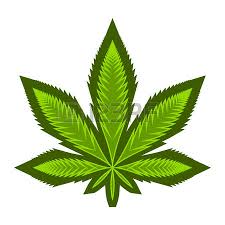 well, Canada is also building a wall with the U.S. and I don't think there will be any protests. If there is opposition, it will be because its not being built fast enough. Labor will be free and there will probably be too many volunteers. We are going to build our wall with marijuana plants and the Americans will rush to pay for it. It will be cheaper than paying the cartels.
Posted by Jack Sakalauskas at Monday, February 06, 2017

Just got this e-mail Good morning,its very urgent please i need you to reply me back because God have directed me to you,

When I met my wife, I told her I could speak four languages. She soon realized that all I could do was order two beer in four languages 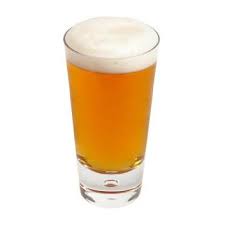 Last evening I was watching the evening news

and I came to the conclusion that the name of the show should be changed to "The Side Effects Half-Hour."  I am of course referring to ads on the show. All the ads are for drugs and at the end of each ad is a list of side effects, which at some times can be more scary than the news. I noticed that after 15 minutes the show goes to one ad per news item. The scariest ad I ever saw was the one that said the cure could cause death. It would certainly cure all your problems. Makes you wonder.
Posted by Jack Sakalauskas at Friday, January 27, 2017

I'll wake up tomorrow morning, and my first thought will be. "I probably didn't win the Lottery." Now I'm thinking that I should write a post for tomorrow. "Yep, I was right.'

A millionaire and a model. The American Dream

Why do you go to Times Square on New Year's Eve? 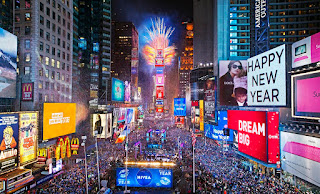 It is terrible. Only tourists do this. And young New Yorkers may try this once if they don’t listen to reason by their friends.
People start arriving around 5 pm for a midnight ball drop. I’m not sure what time the live entertainment starts.
You are herded into pens by the NYPD. You have to stay where they put you for the entire time. If you leave the pen, you will not be permitted to return. You will be herded into a new pen if you plan to stay and will be separated from your friends.
You can not block the sidewalks.

A remarkable video of a dog protecting his injured companion stuck on a railway track as a train barrels overtop of them has gained global attention since it was posted online over the holidays.
The dogs were spotted huddled on the train tracks on Christmas Day in the Ukrainian community of Uzhhorod by Denis Malafeev, who posted the footage to Facebook.
One of the canines in the video appears to be injured and unable to stand, and the other dog stands guard beside her. When a train rushes toward the dogs, the male dog flattens down beside his friend and pushes her head down to shield her from the locomotive overhead.
When the train finally passes, the dogs appear to be uninjured.
The astounding footage has since been viewed more than one million times and has been picked up by media outlets across the globe.
It was challenging to help the injured dog because its companion attempted to defend her from anyone getting too close, Malafeev wrote in the Facebook post.
The dogs were eventually taken to safety and reportedly adopted to a new family, which has named them Panda and Lucy.
Posted by Jack Sakalauskas at Sunday, January 01, 2017 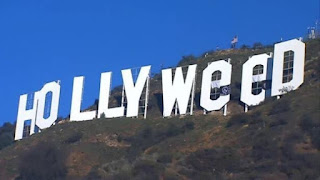 LOS ANGELES -- No, Los Angeles residents, it wasn't your hangovers playing tricks on you. The Hollywood sign really did read "HOLLYWeeD" for a few hours on New Year's Day.
Police were investigating Sunday after a prankster used giant tarps to turn the iconic sign's two white Os into Es sometime overnight.
The vandal, dressed in all black, was recorded by security cameras and could face a misdemeanour trespassing charge, said Sgt. Robert Payan.
The person scaled a protective fence surrounding the sign above Griffith Park and then clambered up each giant letter to drape the coverings, Payan said.
The prank may be a nod to California voters' approval in November of Proposition 64, which legalized the recreational use of marijuana, beginning in 2018.

ADVERTISING
inRead invented by Teads
Hikers and tourists in the hills spent the morning snapping photos of themselves in front of the altered sign before park rangers began removing the tarps.
"It's kind of cool being here at the moment," Bruce Quinn told KABC-TV. "I thought we came to see the Hollywood sign, not the' Hollyweed' sign. But hey it's OK with me!"
While attention-grabbing, the prank was not exactly original. Forty-one years ago to the day -- Jan. 1, 1976 -- a college student similarly altered the sign, using curtains to make it read "HOLLYWEED."
Posted by Jack Sakalauskas at Sunday, January 01, 2017

Were medieval battles as brutal as in the movies? 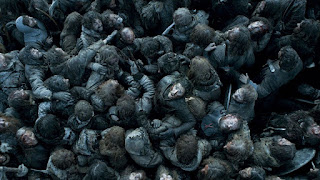 No they were not.
Soldiers fought in formation (instead of breaking off into a bunch of mindless solo melees where they were surrounded by enemies on all sides). They wore armor (which is much more protective than shown in the movies) and often had shields. The result basically meant it was much harder to kill people, if you got injured you could usually back out of the fight and let the men behind and to the side of you continue on in your stead, meaning that being on the front line wasn’t a death sentence. Battles were usually much longer more drawn out affairs, but eventually a line would cave in or moral would break and an army would flee. Almost all of the killing would actually happen after the battle was finished and the enemy army was on the run (no longer fighting back). It was rarely important to exterminate the enemy army - just defeat it, and after the initial route, any remaining enemy soldiers - particularly the nobility - would often be spared (though not always).
Soldiers were humans, and humans don’t like to die. Armed men would try everything they could to avoid fighting other armed men. There are many reports of soldiers refusing to fight each other, just standing at a safe distance trying to keep the other army at bay. Very rarely would soldiers actually meet each other in pitched battle. Most wars were fought by opposing forces who avoided each other at all costs, and pillaged the peasant population of either side instead. You could get a lot more resources by pillaging the working class, damage the economy of the country much more, and at significantly lower risk of your own life in the process. Field battles were extremely rare, and they are all so idolized in history because of how few there actually were. In order for 2 armies to meet in pitched battle, they would both have had to have seen each other and both decided that they had good odds of winning the fight. If one army had less men they would simply run away, only under specific circumstances (such as holding a chokepoint) would an army fight a seemingly losing battle. Siege battles were also very uncommon, usually the invading army would simply camp outside the fortress and raid the countryside for supplies while the resident force slowly starved. Eventually one side would out-resource the other and the losing side would give up.
That all said, when shit hit the fan and your life was on the line, you fought like hell and payed a bloody price, but as a whole hollywood vastly over-dramatizes and misrepresents the brutality of medieval warfare.
I would definitely recommend checking out Scholagladiatoria and Lindybeige, both excellent YouTube channels from creators who have a vast amount of knowledge on these subjects.