Today it's supposed to be 28C/82F. Of course the humidity will be higher. We are waiting for the Power Co. to arrive. They are going to pick up my old humidifier and gve me $10.00. Considering that I bought an almost new one at a yard sale for the same price, its a win win situation. Then its off for a haircut. Also thinking that today I may switch motors on two lawn mowers. But that's to be seen since my wife hasn't given me my marching orders yet. On second thought, she did tell me something last night. I have to fix something on my daughters wheelchair. Better do that right now.

O.K. That's done. And the haircut too. As I was having a bagel this morning, I remembered the first one I had. I was visiting a cousin in N.Y.C. and Sunday morning after mass, we went to a bagel store. They had six cash registers and a lineup like McDonald's. Behind this was trays of different flavour cream cheese. That was my first experience with bagels and I was impressed. This reminds me of my first experience with large pretzels. Driving into Philadelphia, there were people at the stop lights selling large pretzels covered with course salt. My wife, being from Germany, had to have one. Soft pretzels, yum,yum.We went to Philly over thirty times and Pretzels were on the menu. 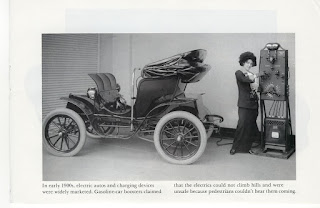 The big buzz on tv last night was the new Chev. electric car. As you can see from the photo, the electric car is not new. We had them over a hundred years ago and progress went nowhere. They were slapped down by the oil companies. As Sarah Palin would say,"Well, how did that work out for ya? Maybe not that well, considering oil supplies, pollution etc. Where would the electric car be now if had a hundred years to improve? Would the planet be a better place to live? That's something we will never know. Greed dictates how things go and the track record is not too good on that.

They have small videos on tv about Canadian history. One of them was about Jacques Cartier who is credited with claiming Canada for France in the early 1500's. In the video he is aboard ship and one of the crew tells him that they have trouble steering the ship because of the amount of cod. When he goes for a look, he says something like,"My God, we have enough fish to feed the world till the end of time." Well, how did that work out for ya?  The reason I mention this is that you can't fish for cod anymore. We all know that. But in Newfoundland, for the next two weeks, you can fish for cod. Not with a net, a fishing line. So it will be cod for dinner and fishcakes for the freezer. I guess forever came sooner than we thought.
Posted by Jack Sakalauskas at Wednesday, July 28, 2010