Start The Morning With Chi 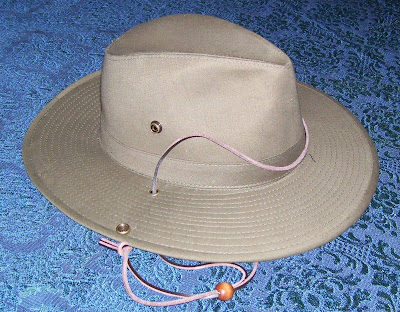 Its Sat. morning. Nice out now,but I think it is supposed to rain later.

I have one of those Magic Bullett blenders. That is some little machine. I use it almost every day. I have gone over to a liquid breakfast, so to speak. Put everything in the glass provided, screw on the base and voom,voom,voom finished. Here is my recipe. Got it from the newspaper.
Fill the glass half full of milk. Put in one banana, (use large spoon) for one spoon of wheat germ, sunflower seeds (without the shell of course), walnuts, flax seed, chi seeds (you should look up its content and history) and virgin olive oil. Then you need two tablespoons of yogurt and top it off with milk. After that,the three vooms and you are finished. Now you have everything you need in a breakfast. You can buy the flax seeds already ground but I like the crunch. I hope this will give me fortitude this morning because I have to go yard sailing with my wife.

Bought a new hat the other day. I guess it is something like a cowboy hat. Wide brim and all. My friends are poking fun at me but I like my hat. Makes a big difference walking in the sun. The wide brim keeps my face cooler than with my other ones. When I was much younger, I was expecting to be wearing a hat all the time like my father. But John F. Kennedy put the kibosh to that. He didn't wear a hat, so that became the new fashion. Wiped out the hat industry. So when the kids grew up and it was time to switch to a new hat, there wasn't any. They just kept wearing their baseball caps. So now old men still wear them. Come to think of it, it does go with the rest of the clothing. And that's not a compliment.

Back from the yard sales. I think this is the first time I've gone out and not spent any money. Of course I spent money on gas, which today is seling for $1.40 a liter. That would be $5.30 a gal. My wife and son just took off to Wal-Mart. She is running around looking for new glasses. We had tests done last month. My glasses are still good. No change in five years. The doctor said that eyesight doesn't change much after 60 yrs. of age. They just have to watch out for other things.

I was going to add a photo of the Magic Bullett. But I changed my mind and will put up one of my hat. My son just got an e-mail from one of my brothers. He bought an Apple computer at a yardsale for $75.00. Now he is asking my son how to get into it if he doesn't have a password. He is always buying computers at yardsales. I don't know if he ever checks them out first. Money with wings.

Posted by Jack Sakalauskas at Saturday, May 31, 2008 No comments:

The Calm, Quiet Vitamin -- and Why You Need It 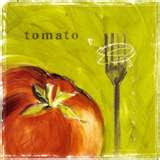 Know what's super bad for your body? Inflammation. It’s thought to be at the core of problems like heart disease and heart attacks.
Know what's a great way to quiet inflammation? Get your fill of vitamin K. Good choices: just about anything leafy and green -- from spinach and kale to collards and turnip greens.
Fanning the Flames of Inflammation
Inflammation is your body's response to injury or infection. And when it occurs in your blood vessels, inflammation can be a sign of bad things to come -- like ruptured arterial plaques, clot formation, heart attack, and stroke. Enter leafy greens. They pack a real vitamin K punch, and more and more research is linking high vitamin K intake to a lower bodywide inflammation index.
Going for the Green
Bored with salads? The trick to getting more greens -- and more vitamin K -- into your diet may be learning to use them more creatively. Start with something simple but different, like this Basic Sauteed Kale recipe from EatingWell.
Then, move on to these K-rich greens recipes that will have you feeling like a world traveler:
.Simmer kale with chickpeas and exotic spices for this vegetarian Indian dish: Indian-Spiced Kale and Chickpeas.
.Slip collard greens into your red sauces, like with this unique Italian dish: Pasta with Greens and Tomato Sauce.
.Mix spinach with butternut squash and beans for this Brazilian soup: Amazon Bean Soup with .Winter Squash and Greens. Here's why your hands can't do without K.

CHICAGO (Reuters) - Elderly people who took commonly prescribed drugs for incontinence, allergy or high blood pressure walked more slowly and were less able to take care of themselves than others not taking the drugs, U.S. Researchers said on Saturday.

They said people who took drugs that block acetylcholine -- a chemical messenger in the nervous system critical for memory -- functioned less well than their peers.

"These results were true even in older adults who have normal memory and thinking abilities," said Dr. Kaycee Sink of Wake Forest University School of Medicine in North Carolina, who led the study of 3,000 people of whom 40 percent were taking more than one anticholinergic drug.

"The effect is essentially that of a three- to four-year increase in age. So someone who is 75 in our study and taking at least one moderately anticholinergic medication is at a similar functional level to a 78 to 79-year-old," Sink said in an e-mail.

Sink's findings, presented at American Geriatrics Society Meeting in Washington, add to a growing body of research that suggests these so-called anticholinergic medications can hasten functional and cognitive declines in elderly people.

Some of the most common such drugs in the study included the blood pressure drug nifedipine (sold as Adalat or Procardia), the stomach antacid ranitidine or Zantac, both with mild or moderate anticholinergic properties, and Pfizer Inc's incontinence drug tolterodine or Detrol, which is highly anticholinergic.

"The tricky part ... Is that many useful drugs from many different classes of medications have anticholinergic properties," Sink said.

She said in many cases newer drugs are available that do not have these effects and said doctors should look out for them for elderly patients.

Dr. Jack Tsao, a neurologist with the U.S. Navy, reported last month at a American Academy of Neurology meeting that elderly people who took anticholinergic drugs had a 50 percent greater rate of memory decline than people in a long-term study who did not take the drugs.

Sink studied the effects of taking multiple anticholinergic drugs on walking speed, basic activities such as dressing, eating, taking care of personal hygiene, grooming, and harder activities like shopping, cooking and managing money on her test subjects whose average age was 78.

The researchers found that the more anticholinergic drugs people had in their systems, the worse their physical function, based on reports from people in the study and on independent measures of their performance.

In a separate study this month in the Journal of the American Geriatrics Society, Sink found that older nursing home residents who took drugs for dementia and incontinence at the same time had a 50 percent faster decline in function than those treated only for dementia.

"I would encourage patients to bring in a list of everything they take (even over-the-counter medications) to their doctor and have them review it at least yearly," Sink said. "Physicians should try to decrease anticholinergic burden whenever possible."
Posted by Jack Sakalauskas at Wednesday, May 07, 2008 No comments:

Which does the best job of protecting your heart: a Mediterranean-style diet or a low-fat plan?

Either approach is good for your health. But the Mediterranean type gives your ticker some extra protection. Here's how.

Cholesterol BusterThe
Mediterranean-type diet brought cardiovascular disease risk down 15% in a recent study, versus 9% for the low-fat plan. Why the difference? The olive oil, nuts, fruits, veggies, whole grains, and fish that characterize a Mediterranean diet are chock-full of fiber, healthy fats, and antioxidants -- all things your heart loves. (Here's something else your heart craves.)

And More . . .
Some other reasons that might persuade you to eat like the people living in Greece, southern Italy, and other Mediterranean Sea spots:
Your heart could be healthier after only 3 months of it. Here's how.
It could be a boon to your brain as well as your heart. Here's what we mean by that.
Throw in a walk and you'll get healthy even quicker. Here's why.

So go ahead, take the first step toward the heart-healthiest diet there is.
Step 1: Trade in your beef hamburgers for this delicious Mediterranean take on burgers.

Did You Know?
Whole-grain bread with olive oil makes a smart appetizer. Here's how it may help you eat less overall.
Posted by Jack Sakalauskas at Friday, May 02, 2008 No comments: