Big rain and thunder today. Supposed to be 20C/68F. The grass needs the rain. Someone gave my neighbour a lawnmower, non working that is. Had that going in about 5 min. Have two of hers now, which I will combine to make one that will be better than mine. That's my plan. God may change that. I was supposed to take my daughter to Halifax to pick up glasses. May have to put that on hold. In and out of the van and wheelchair in the rain not a good idea. 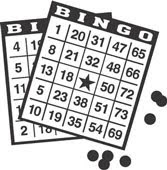 Been some noise lately about children playing Bingo. One interview complained that this would lead to problem gamblers. My own thoughts on that are with pre-teens and teens learning poker, we are long past that. And the idea that this is a sport is beyond me. I always thought that sports require some exertion. Not sitting behind a table perhaps having a beer. Imagine in Olympic Boxing, "Hold that punch Bud, I need a swig of beer." Back to Bingo.  Kids have been playing Bingo as long as I can remember. Sometimes its a family outing. I can't imagine a slew of kids running out to play Bingo. Actually I can't imagine kids running.

I remember when I was young, there was always Catholic jokes. I'm catholic and I told the same jokes. Funny is funny. Masons have told me that when they made a speech, it should include a good Catholic joke.
At the top of the joke list would be Catholics and Bingo. Lately I watch tv and see the ads, "Masonic Bingo, seven nights a week." Now that's funny. Other jokes would be about eating fish on Friday. And what happens now? Everyone after fish oil capsuls. Need that Omega 3. It appears that some must have known something. And this must show that the churches are coming closer together. Everyone plays Bingo and want to eat fish and not just on Friday. God works in mysterous ways.

The paper this morning show almost a full page ad for a beer sale. Since you can only buy beer from a Government store, there is no competation. And people that are going to buy beer, go and buy it. A sale doesn't make much difference. Then again, maybe some stock up. From the sellers point of view, if they have it, they will drink it. The sale doesn't make much difference to me. Of course, this is from someone who drinks a beer a year and the last drink of liquor was at a family funeral three years ago.
Posted by Jack Sakalauskas at Thursday, July 22, 2010