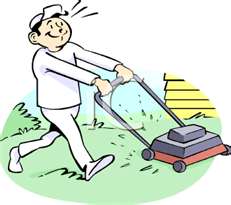 The weather for this week is rain. I think all week. We had a couple of good days last week, where we were able to cut the grass. I wanted to cut it this week before I go to the hospital. There won't be much cutting afterwards.

Because of an enlarged prostate, I had to have an operation last Dec. So they cut a part of it out and that should have been the end of it. But, by Feb, it grew back. So I need another operation, which is on Thur. I was wondering if it is like the miracle of loaves and fishes, or is it because I'm so healthy. I won't be cutting off a finger to test that theory.

This pretty well wrecks my summer. For the first few days, I was only allowed to walk around the house. A few days later, I was allowed to go out on the patio. (But who would, in Dec.?) I wasn't allowed to drive for two weeks. No lifting for a few months. I'm wondering if this time around, the rules will be more stringent.

At least I know what to expect. The first time I go to the washroom, it will be really bad, but each time after will be less. All the chores, I lined up for the summer, had to be done in the last two weeks. Too bad, I like cutting grass. It will give me time to write my YA book.
Posted by Jack Sakalauskas at Tuesday, June 07, 2011